Desktop, mobile or SmartTV – what advertising channel is more efficient?

Online advertising market has shaped within the scope of capabilities of the Internet and the devices that we use for joining the global network. Each advertising channel – and we will touch upon mobile, desktop and interactive TV – is specific and opens new perspectives for advertisers and publishers. What is more efficient? And even more important – how can one measure this efficiency?

In 2017 the number of internet users exceeded 4 billion, of which a quarter billion used it for the first time in their life. Now the number of internet-users is growing due to the mass circulation of smartphones and mobile internet in the emerging markets. In 2018 the share of mobile web-traffic reached 52,2% of the total one. For Asia and Africa, this share is 65,1% and 59,5% correspondingly. On the developed markets Interactive TV is gaining popularity. The reverse trend is with the traffic coming from desktop – its volumes have been decreasing during the past years.

The question is how long such dynamics will remain? The market of mobile devices is rapidly sating, and it is very likely that in a few years its growth will decrease. Can one expect that as soon as living conditions in Africa and Southeast Asia – the countries due to which the number of internet-users grows – will improve, the demand for PC and laptops will increase correspondingly? Anyway, the share of mobile traffic will remain the biggest as well as the share of mobile ads. 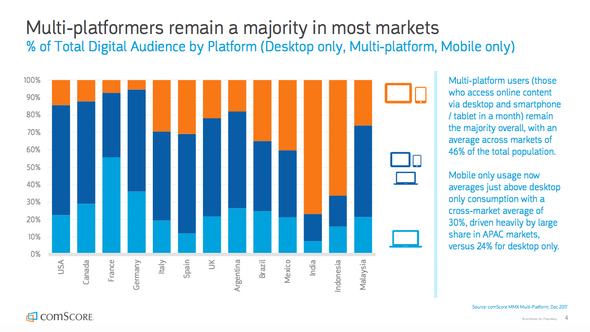 Ad formats fully depend on the type of the device. Up till now both website configuration and ad campaigns have been planned primarily for the desktop. Beside the fact that a PC remained the main channel for accessing Internet, there were several other reasons behind it. PC monitor size gives a chance for making experiments with different ad formats, and an opportunity for opening several browser windows simplifies navigation and transition to advertiser website.

Mobile devices have readjusted the process of Internet-surfing. The speed of mobile Internet is still lower than the regular one, switching between tabs is more difficult and thus enhances the common problem of latency with mobile Internet. As a result, the user often leaves the page before its loaded. Even though modern smartphones have a considerably large screen, its size nonetheless limits the number of suitable display ad options. 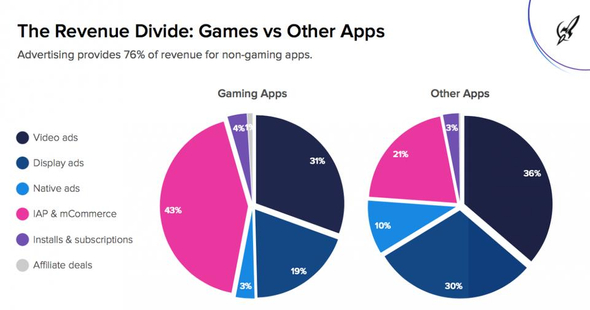 Mobile applications formed a separate market taking up to 80% of our time spent on gadgets, primarily due to games, social networks, and messengers developed as applications for smartphones in the first place. Main inventory formats are still pop-ups and video, but principles of user’s interaction with inventory differ from usual – ads become part of a game as the way to gain bonuses.

Native ads and video are now the most popular formats. While the first one steadily develops into a prevailing type in social networks to the detriment of traditional sites, the second is widespread among all the media, thanks to the high user’s engagement. Including ITV, where large monitors and television format have ensured the prevalence of video. Considering the fact that video ads get the highest response, the target audience is represented mainly by the middle class, and internet technologies make targeting possible, - the market supply seems oddly low.

One should take into account that the same metrics can act differently on various devices. New metrics are implemented firstly on desktop site versions and then adapted for other devices. Though more and more publishers are sticking to “mobile-first” approach, it does not change the fact that our pocket gadgets have some issues waiting to be resolved. Among those – impression non-delivery because of poor internet connection and greater misclick percentage (according to different sources, between 6% and 50%). At the same time, mobile conversion rates for E-commerce are 2-3 times lower than for desktop.

As for mobile apps, the situation is aggravated by the fact that while focusing on video ads (56% of the budgets) most app developers do not have access to VTR measurement tools. 80% of apps still run CPM and CPC based measurements which are far from being representative when we talk about video. No wonder that the vast majority of app developers are dissatisfied with their ad revenues. 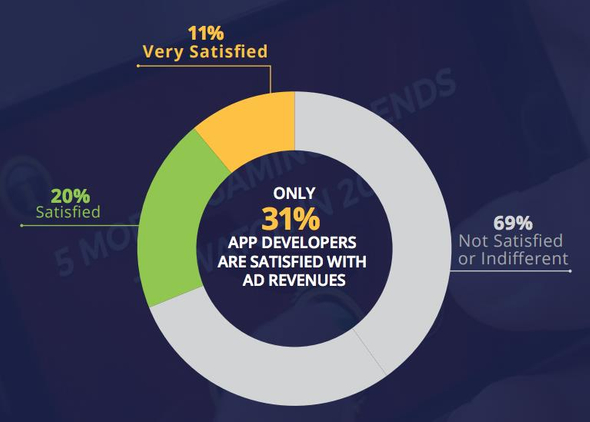 ITV segment can boast an opposite situation – video metrics are integrated at the appropriate level. On top of that, there are no problems with their performance as well. According to Yandex, SmartTV demonstrates view-through rate up to 90% and even more. Audience loyalty is also high, as people are used to commercial breaks on traditional broadcast television. At the same time efficiency measurement for SmartTV advertisements is limited due to the lack of unified monitoring and accounting system. 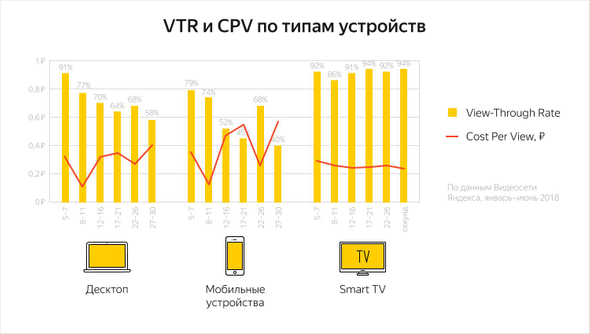 Both desktop, and mobile, and ITV have their advantages: PC remains the most convenient conversion platform when mobile devices and SmartTV are gaining more weight in brand promotion. It means that an advertiser needs all three of them. But what affects the planning of advertising campaign by a publisher is that each channel has its limitations. Users’ goals, location, timing and the circumstances of addressing to the site vary depending on the device’s portability and navigability. It should be considered when choosing a type of content, including advertising one.

PC is the primary tool for work, study and internet-surfing. A mobile version of site is generally less user-friendly and seems to be more vulnerable in comparison with the desktop version, that is why mobile web gets lower share of internet traffic. Even an interface ideally optimized for a smartphone’s screen is inferior to the full version of the site with well-designed architecture. For important actions, e.g., purchasing, users tend to switch to desktop when possible, so B2B targeting and retargeting is reasonable to be applied to PC and laptop users (NB: in this respect “mobile-first” strategy is far from being exhaustive – each promotion channel deserves attention).

Mobile is used for communication and dealing with current tasks that are not affected by small screen size. Smartphone has turned into an indispensable feature of private life a long time ago, so special attention should be given to B2C: geo, demographics, behavior – the more customized is the offer, the better results can be achieved (the main thing here is avoiding the effect of invasion of privacy).

Entering the mobile applications market is quite easy, but profit perspectives are not so promising, as we spend about 90% of the time on top-5 apps. The type of content matters a lot – market leaders are retailers that offer discounts for purchasing through an app instead of a browser.

SmartTV is usually used at home in the evenings, is associated with entertaining content and focused on the family rather than an individual. As an interlude between traditional and digital media, ITV is an important tool of promotion, but it is yet to unleash the potential. Advertisers are slow to post their content on a platform without an established regulatory framework for ad campaigns.

Anyway, we digest the content of different kinds through every type of devices. Today’s user is a multitasking user, that is why one should consider the nuances of their audience’s behavior: how traffic and visits are distributed between devices, whether this distribution changes throughout the day, what actions are done mostly through PC or smartphone, etc. It is essential to track both quantity and quality – the content of an advertisement should be in line with the site content as well as user’s interests.

Insight into audience’s interests and goals helps to optimize launched campaigns and forecast delivery of the planned ones. Publishers can increase inventory revenue by correlating their goals with the specifics of each channel, combining capacities of platforms and taking the advantage of ad formats diversity.