Big Brother Against Coronavirus: How Governments Utilise Surveillance to Fight the Pandemic 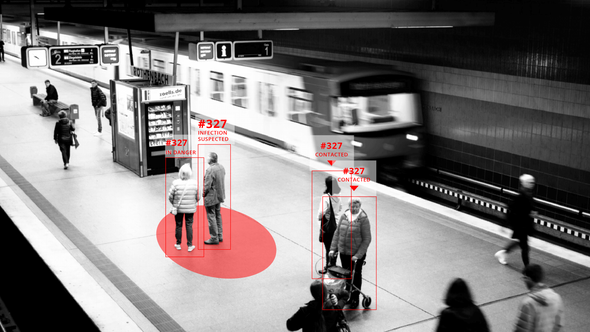 How do you like this concept: the state is deploying citizen tracking systems to quickly find and isolate COVID-19 sufferers and thus stop the pandemic? Look at reports on new cases and fatalities – honey is sweet, but the bee stings. Meanwhile, for a dozen countries, this is already a new reality.

Theoretically, this tactic is quite efficient.

It is a known fact, but still: a coronavirus infected person is contagious for several days before symptoms start to show. During that time, they use public transport, work and/or study, visit friends and family, go to shops, parks, bars, museums, gyms, etc. (at least that was the case not so long ago).

With a mere interview, it is impossible to create a list of all people who had contact with them. It is a long, tedious process yielding inaccurate results. Could you remember at what exact time what subway carriage you took a week ago? Well, your smartphone remembers.

Once these processes – smartphones logs matching and notifying the lucky ones via SMS that same day – are automated, the quarantine efficiency grows by order of magnitude. If we cannot lock everyone down for a month until everything settles down, then at least we will know who is mandatory to be quarantined.

At the same time, control at the individual level is most effective, while targeted measures can be taken upon the number of infected. Imagine that hospitals record a thousand new cases daily. That means ten thousand people are to be notified and isolated. Per day. At this point, nationwide quarantine is indispensable.

In practice though, the introduction of automated systems inevitably brings up problems of anything but an epidemiological nature.

To track who has been near the confirmed patient for the past few days, you need the smartphone location data and a phone number to notify its owner. However, this information is sufficient not only for anti-epidemic measures but also for literal espionage.

That is why it is crucial to understand how such a system will be designed:

We know the ins and outs of geolocation tracking systems, as we have developed them for different-use cases ourselves. For example, according to legislation one can watch movies by subscription model at home only, so the publisher is able to know the user’s location. Or the client who wants to analyse the footfall at some site and compare it with their competitor’s.

For this, there is no need to de-anonymise anyone. Industry standards and the law are on the side of privacy, and providers legally sell the location data. But dedication and resources make everything possible. If we imagine that the entire population is on the radar, and this radar is compliant not to GDPR, but a government with a compromised reputation, it is easy to get a little twitchy.

Regardless of political specifics, the existing systems can be divided into three types by invasiveness level

Geolocation tracking already saves lives by helping to contain the spread of the virus. But the issue of current and long-lasting consequences remains.

All the more so as the examples above enable substantial discussion.

South Korean residents are forced to change their routes and leisure activities, knowing that information about them may become public and fearing further harassment. But there the mortality rate is only 1.24%.

Chinese color QR-codes exacerbated panic and prejudice as even healthy people could receive a red mark, for unknown reasons.

The future of such systems is also worrying. The Iranian application can compile detailed dossiers. On the other hand, one can uninstall that app, but not the anti-terrorist system of Israel. However, this does not guarantee by any means that the data once collected via the app will be deleted, and the infrastructure once built will not be used for political purposes.

Meanwhile, the United States and the United Kingdom are considering introducing similar systems that would analyse mass movements and alert potentially infected people. And on March 23rd, Russian Prime Minister Mikhail Mishustin already commissioned the Ministry of Communications and Mass Media to develop such a system and even issued a deadline on March 27th.

Mobile operators are supposed to transmit user geolocation data to the system that will identify people who had contacts with confirmed infected and instruct them to self-isolate and report on their health condition.

Is it possible to deploy such a system from scratch in 4 days, what will it look like, what kind of data will be transmitted? We are yet to know.

The pandemic has posed many controversial questions to humanity. How ethical it is to sacrifice the privacy of citizens to overcome the global crisis as soon as possible is just one of them. And one more: to what extent we, as citizens, are ready to put up with the restriction of our rights, probably for many years to come.

In other words, would YOU install such an application?